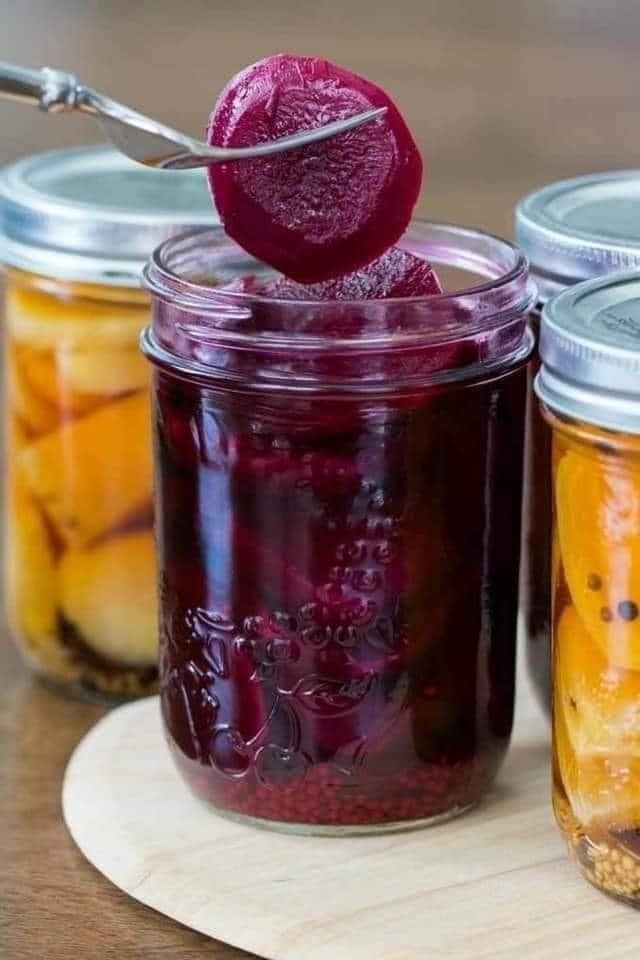 Beets are a weekly ritual around here. Usually we boil them and toss them in a sweet sour vinaigrette and keep them in the refrigerator to eat all week. The vinegar in the dressing “pickles” the beets, helping them last longer in the fridge.

Many pickled beets I find are much too vinegary, hiding rather than enhancing the naturally sweet flavor of the beets. This recipe is my mother’s approach to preparing the beets, using cider vinegar balanced with a little sugar (you could also just use balsamic), along with olive oil and some dry mustard.

Step 1:
Place beets in a large stockpot with water to cover. Bring to a boil, and cook until tender, about 15 minutes depending on the size of the beets. If beets are large, cut them into quarters. Drain, reserving 2 cups of the beet water, cool and peel.

Step 2:
Sterilize jars and lids by immersing in boiling water for at least 10 minutes. Fill each jar with beets and add several whole cloves to each jar.

Step 3:
In a large saucepan, combine the sugar, beet water, vinegar, and pickling salt. Bring to a rapid boil. Pour the hot brine over the beets in the jars, and seal lids.

Step 4:
Place a rack in the bottom of a large stockpot and fill halfway with water. Bring to a boil over high heat, then carefully lower the jars into the pot using a holder. Leave a 2 inch space between the jars. Pour in more boiling water if necessary until the water level is at least 1 inch above the tops of the jars. Bring the water to a full boil, cover the pot, and process for 10 minutes.