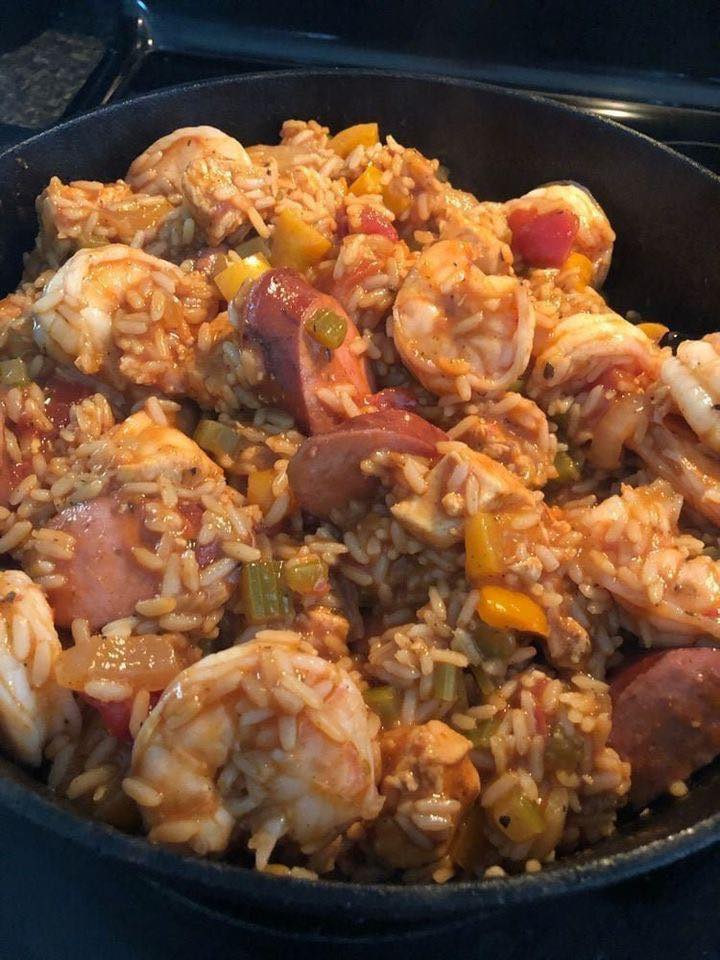 This incredible jambalaya dish is about as good as it gets, and that’s saying something! THE TASTE OF THE CLASSIC!!! Because of the dish’s widespread popularity in Louisiana, local families all around the state have contributed their own unique recipes. However, there are in fact two primary classes to choose from. Cajun vs. Creole. Cajun cuisine is characterized by a smokier flavor and, in most cases, does not use tomatoes. Typically, the meats are cooked first, and then the Cajun holy trinity of veggies, which consists of onion, green bell pepper, and celery, are added in afterward. In our version, we use chicken, sausage, and shrimp, which is also a frequent ingredient in the Creole version. In the Creole version, however, shrimp is the primary source of protein. Tomatoes are often found in Creole cuisine, much as ours, which also features them.

This traditional meal is wonderful in so many different ways, that it’s hard to choose just one. And don’t worry, if shrimp isn’t your thing, you can always exclude it from the recipe. The same goes for the chicken or the sausage! It’s true that when you put the whole thing together, you get a meal that not only tastes and feels very genuine but also is surprisingly simple to put together.

How To Make Jambalaya

Step 1: Heat the olive oil in a large Dutch oven over medium heat. Once the oil is hot, add the onions, celery, and bell peppers to the pot and season with salt and pepper. Cook the onions, celery, and bell peppers for about 4 minutes until just tender. Then, stir in the garlic and continue to cook for a minute more.
Step 2: To the pot, add the chicken. Sprinkle with sweet paprika and oregano. Stir and cook for about 5 minutes or until the chicken is browned.
Step 3: Now, add the prepared sausage and tomato paste. Stir and continue to cook for an additional minute before adding in the chicken broth, crushed tomatoes, rice, and Cajun seasoning.
Step 4: Bring everything to a boil, then adjust the heat to medium-low. Put the lid on and cook for another 20 minutes or until the rice is tender and most of the liquid has been absorbed.
Step 5: To the pot, add the shrimp and cook for 4 to 5 minutes more or until the shrimp is cooked through and pink. When done, take the Jambalaya off the heat and serve immediately garnished with some sliced green onions and dried parsley.