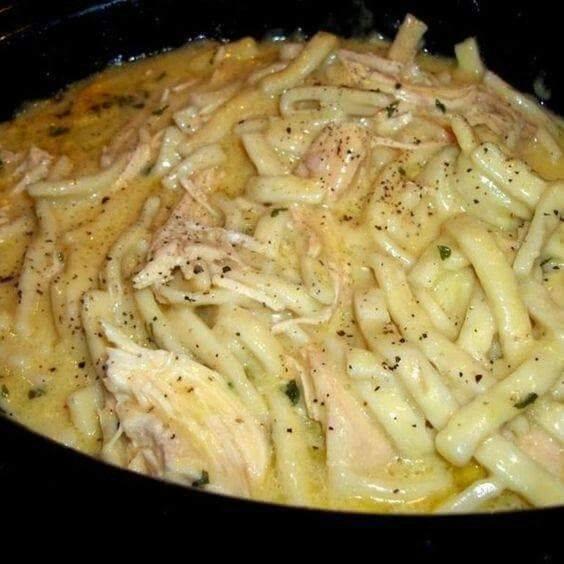 If you would like to make this recipe in the Instant Pot®, here is that recipe: Instant Pot Chicken and Noodles. Though the frozen egg noodles are becoming more common, not every grocery store has them. You can use a bag of homestyle egg noodles instead. Keep an eye on the moisture level in the crock as it’s possible they will need more broth. It has been deemed unsafe to use frozen meat or poultry in a slow cooker by the USDA. The reason is that the meat will stay at the unsafe temperature range that bacteria can grow at for too long.
I would recommend thawing your chicken in the fridge a day or two before you cook the recipe.

Spread the cream of chicken soup over the top of the chicken, then add sliced butter over the spread soup.

Mix the Better Than Bouillon® Chicken Flavor in the chicken broth till it dissolves, then pout the mix over the butter layer in the crockpot.

Cover the crockpot and then cook on low setting for about 6 hours or until the chicken is done and can be easily shredded. Remove the chicken from the crockpot using a pair of tongs and set it aside.

Add the noodles and frozen mixed vegetables to the soup mixture in the crockpot and stir well.

Cover the crockpot and cook the needles on high setting for another 1-2 hours, stirring halfway through. Meanwhile, shred the chicken using forks and then cover the shredded chicken so that it does not dry out.

Once the noodles are done, add the shredded chicken to the crockpot and mix well. Add some water to lighten if the noodles seem too thick.