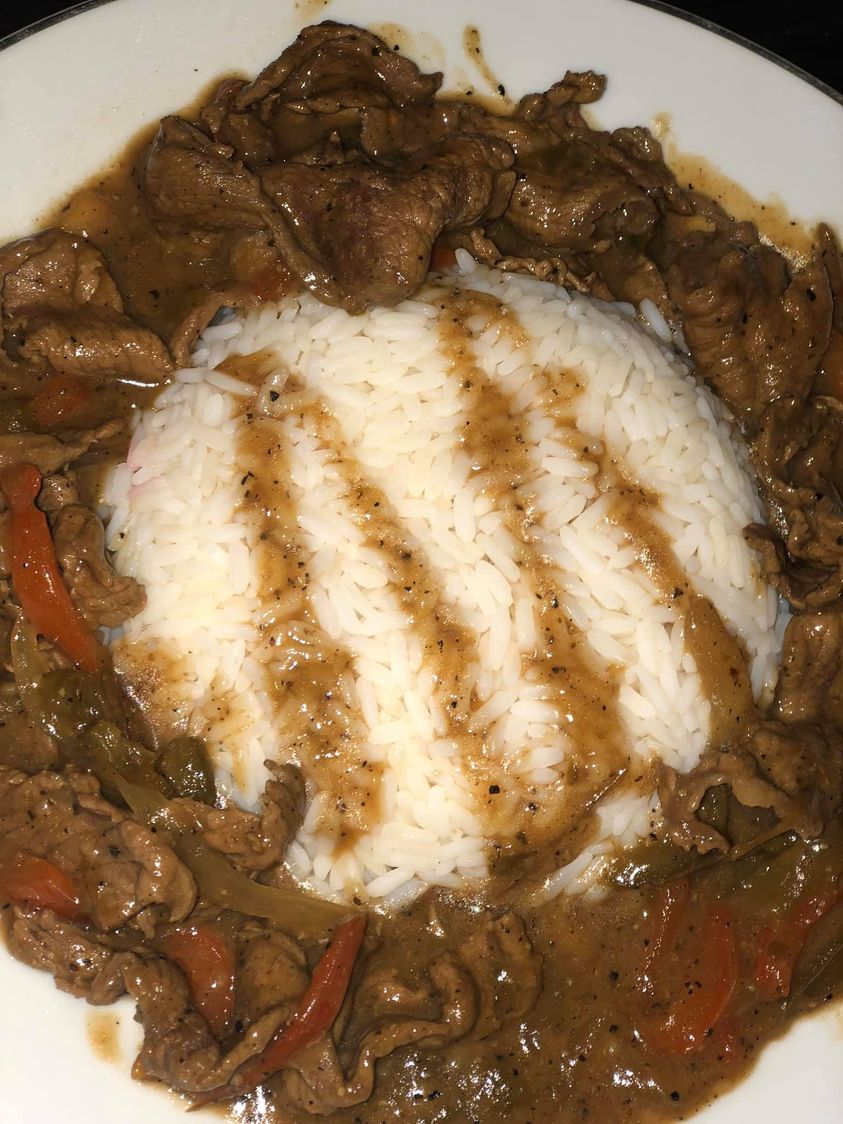 I visited my family this past weekend and conveniently when I got home and hadn’t eaten lunch, my mom had plentiful amounts of delicious leftovers to serve. She bought carne asada from Albertson’s and I was extremely surprised by the abundance of flavor and tenderness of the meat. The carne asada was delectable alongside homemade Mexican rice.

When I got back to LA, I decided to buy some of this pre-marinated, thinly cut carne asada as well (from Ralph’s). Not only was the meat a great deal, but it was juicy and full of flavor, with a distinct taste of cumin. I paired the meat with the same Mexican rice my mom made and some grilled red pepper and red onion. Since all three components of the meal were so flavorful on their own, added calories such as cheese and sour cream were not necessary.

For the meat: Place an indoor griddle over medium heat. Once warm, place piece of carne asada on pan. Cook 3-4 minutes on each side, or until meat reaches desired doneness. In a small skillet, heat olive oil, then add sliced onion and cook until caramelized, about 25 minutes.

Place bell pepper on a cookie sheet and roast in the oven 25-30 minutes, until charred, turning every 10 minutes. Remove pepper from the oven and place in glass bowl; cover with plastic wrap. Once pepper is cool enough to handle, remove the skin and seeds, then slice into lengthwise pieces.

For the rice: Warm large skillet over medium-heat, then add enough corn oil to cover the bottom of the pan. Rinse and strain the Jasmine rice, then pour into pan and toast, about 20 minutes, stirring occasionally. Cook rice until golden brown and aromatic. Adjust heat as necessary, to make sure the rice doesn’t burn.

Add 5 cups chicken broth and 1 tbsp. Knorr Caldo con Sabor de Pollo to rice and cook until absorbed, about 15-20 minutes. While rice is cooking, par-boil 4 large Roma tomatoes to remove the skin (boil until skin of tomato cracks). Peel tomatoes then place in blender. Add approximately 3-4 tbsp. diced onion, 2 cloves garlic, 2 tbsp. Knorr Caldo con Sabor de Pollo and puree. Thin mixture with about ¼ cup water, depending on thickness of sauce. Once rice is cooked, mix with tomato puree and gently stir. Season with salt and pepper, as necessary. Adapt and add vegetables, such as corn, if desired.