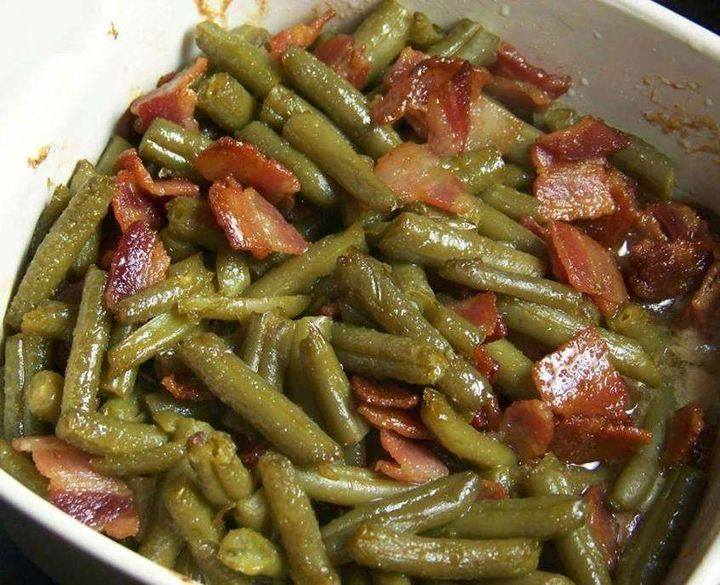 As I always have with other vegetables as well, I frequently cook green beans with bacon and garlic. It was the addition of onion and the cooking method itself, that caught my eye. I always saute the bacon and garlic, then add the COOKED green beans to the pan and toss to coat. With this recipes’s method, the green beans lose their vibrant color, the bacon gets limp, and the dish looks “muddied” overall. I’ll stick to my method, where both the beans and the bacon retain their rich color and where the bacon flavor enhances, rather than overwhelms, the beans.

Nice change from the traditional green bean casserole for the Holidays. Used a packaged thick sliced bacon and frozen whole petite green beans. Cooked the bacon whole first until it was crisp then removed from pan. As per other reviews only retained about 1 tablespoon of the grease. When I added the beans and the water I put a lid on the pan but left it cracked which allowed the beans that were not in the water to steam, while allowing the water to evaporate. When the beans were cooked and the water was pretty much gone, I returned the crisp bacon which I had chopped to the pan and tossed, put the lid on tightly and just let it sit for about two hours. I didn’t want the beans to get mushy, but did want the bacon to soften up a bit. Right before serving I just heated it up. Everybody loved it – will definitely make again.

Put the drained beans in a 9×13 pan.
Add the cooked bacon pieces.
Mix the remaining ingredients ( the crack sauce).
Pour over the beans and bake 40 minutes at 350.
Toss and serve