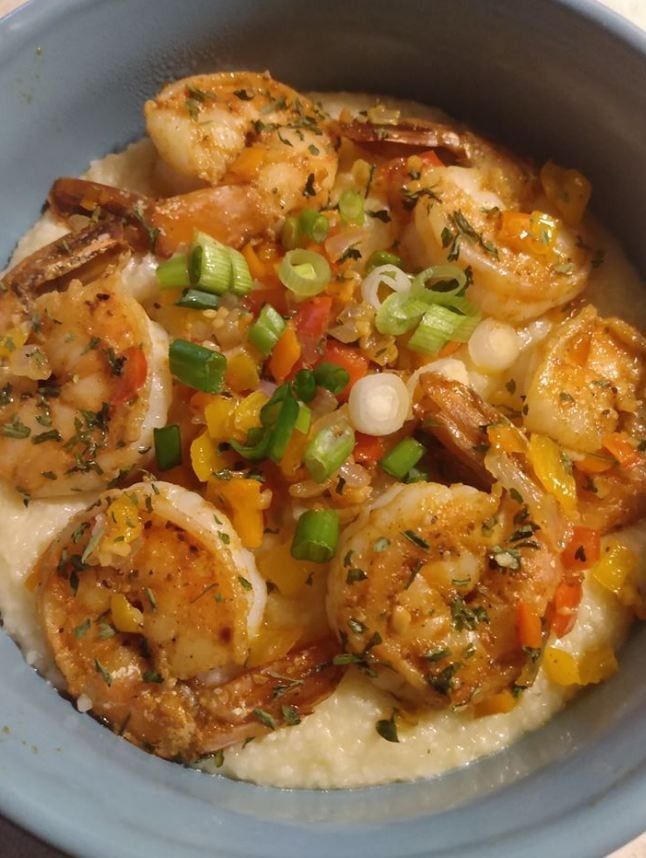 This delectable New Orleans Style Shrimp and Grits recipe will leave you licking your plate and longing for more. The shrimp are skillet cooked with Cajun seasoning, red pepper, green onions, crisp bacon, and garlic all spooned over a bed of creamy cheesy cheddar grits. This classic southern dish comes together quite quickly and is a family and friend favorite.
First, let’s get the grits started and the shrimp peeled. In a medium saucepan over medium-high heat boil the water. Then reduce the heat to medium-low and whisk in the grits and salt. Cook until tender and remove from the heat, stir in the butter, cream, and cheddar cheese. Meanwhile, peel the shrimp removing the tails, and devein if not already done.

Bring milk and vegetable oil to a boil, and slowly add the grits 1/4 cup at a time. Stir frequently to avoid clumping.
Mix in the butter, and cook on low for about 20 minutes.
Toss in the cheese and stir to blend.
While the grits are cooking start cooking the shrimp.
To prepare the shrimp.
In a small dish blend together salt, cayenne, and cinnamon.
Begin cooking bacon in a non-stick skillet.
Once the bacon begins to turn brown, add in the onion, and garlic and continue to cook until onion is translucent.
Toss in the shrimp, and cook until the shrimp starts to turn pink. Sprinkle with spice mixture.
Add in the tomatoes and the vegetable broth.
Cook for 2-3 minutes.
Divide grits equally into 4 bowls, and top with shrimp.