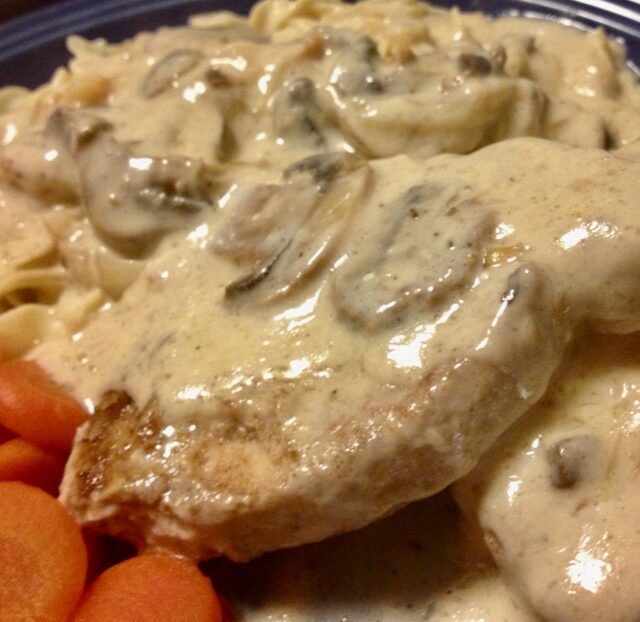 Recipes like this mouthwatering pork chop served in a wonderful sauce with onion and mushrooms are a staple in many households. This mouthwatering meal will win over even the most finicky diners.

As soon as we started preparing pork chops in this way, it quickly became one of our favorite methods to prepare these bite-sized babies! We like the fact that the majority of the preparation time for this meal consists of nothing more than briefly frying the pork chops and creating the simple gravy before stepping back and allowing it to work its magic.

Step 1 – In a small bowl, whisk together the seasoning blend. And spread some of the spice mixtures on each pork chop. You’ll need the seasoning you have left over for the onion gravy.

Step 2 – Then, liberally dust each pork chop with flour and leave aside for later.

Step 3 – In a skillet, bring the oil to a temperature of the medium to high heat. When the oil has reached the appropriate temperature, add the pork chops and brown them for approximately three to four minutes on each side.

Step 4 – Using the same pan, add sliced onions to the drippings and let them simmer for a few minutes before adding mushrooms and allowing them to cook for an additional few minutes.

Step 5 – After adding the remaining flour to the pan and stirring it in while mixing the onions and mushrooms, start adding the two cups of water while continuing to stir. If you want more seasoning, you may add it at this step if you want to.

Step 6 – Over medium heat, bring the broth to a boil. Place the pork chops back into the pan, then bring the heat down to a simmer. Cook with the lid on for around one hour.