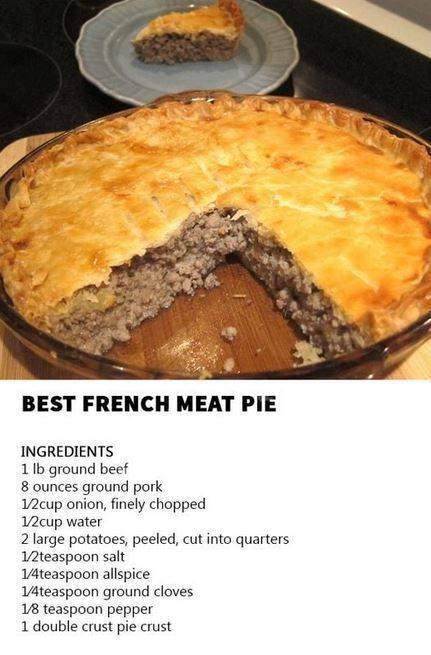 Tourtière is a French-Canadian meat pie with spices and a double crust. It is an important part of the Christmas and New Year’s celebrations in Quebec and for those of French-Canadian ancestry. Meat pies are not exclusive to Canada, by any means.

You find them referenced through history, with versions even as early as Mesopotamia. Roman kings added their own twists and then spread the concept throughout Europe. The Middle Ages also saw a great love for meat pies.

You’ll find meat pies of all sorts across the globe. Empanadas in Latin America. Samosas in India. And traditional mincemeat pies for the British Christmas table. (Traditionally those were made with meat, unlike the more common mince pies made with fruit that you find today. Meat pies in Canada date back to when Quebec was a French settlement. While it is thought tourtière goes all the way back to the early 1600s, the first written recipe appears in an 1840 cookbook, La cuisinière canadienne.

Combine beef, pork, onion and water in a medium saucepan and mix well.
Cook, covered, over low heat until the ground beef and pork are cooked through, stirring occasionally.
Boil the potatoesin water to cover in a small saucepan until tender; drain.
Add to the meat mixture.
Add the salt, allspice, cloves and pepper and mix well; remove from heat.
Mash the mixture with a potato masher.
Roll the pastry into two 11-inch circles on a lightly floured surface.
Fit 1 pastry into a 9-inch pie plate.
Fill with the meat mixture.
Cover with the remaining pastry, fluting the edge and cutting several vents.
Bake at 450′ for 20 minutes or the crust is golden brown.